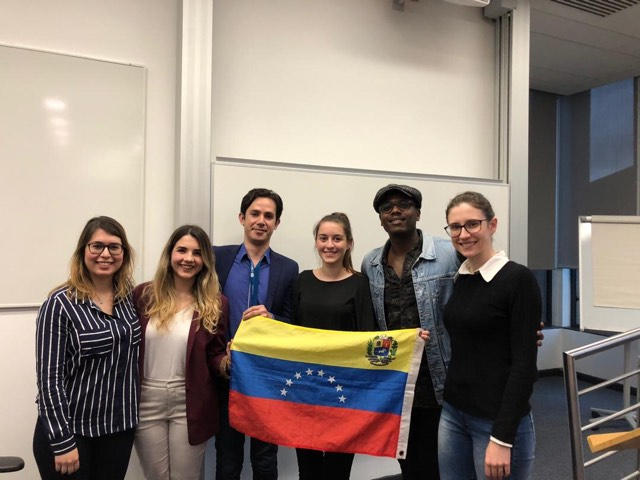 On the 17th May 2019, Café Politique hosted an informative event regarding the current crisis in Venezuela. Topics covered included the political climate, human rights implications and the energy crisis. Our speakers were Maryhen Jimenez Morales from the University of Oxford and Daniela Guerra from Queen Mary’s University and the Co-Founder and General Coordinator of Human Rights NGO Codhez. Moreover, we also heard from our fellow Ustinovian Gabriel Zambrano (a former Coordinator at Human Rights Watch and Renewable Energy Engineer).

Ms Morales discussed the political climate and standard of living in Venezuela. She believes that the country is experiencing a ‘hybrid regime’ as Venezuela used to be democratic and is now rapidly becoming authoritarian. Additionally, Ms Morales highlighted cited blackouts as a major cause of death in the country. Some areas experience weeks and months without access to electricity. This is because the oil and electricity sector have effectively collapsed; the country now only produces one third of the oil produced in 1999. As a result, between 8-9000 refugees are crossing the Columbian border every day.

Moreover, she cited that during the past two weeks, over 400 political prisoners and 10 MPs had to seek asylum as their political ideology did not fit with the regimes’. These problems are worsened as there is no independence or separation of powers. She also discussed further foreseen challenges. Chavez never had received more than 60% of public support, she also posed the following question: ‘Does Chavez really have the public’s support, or does he gain votes via clientelism?’ The state turned into a repressive mechanism to get votes; many were blackmailed to vote accordingly in order to receive necessities such as food.

Next, Ms Codhez presented the Venezuelan crisis through a human rights context. By the collection of data from various human rights groups and non-governmental organisations she cited that journalists are being increasingly targeted and detained in the country. In January this year twelve persons were detained, along with twenty-seven persons in February. According to Espacio Publico as a result, freedom of speech is highly affected. Most media are controlled by the Maduros regime, out of 144 newspapers only 74 remained active in August 2018. This number has decreased further since as newspapers are running out of paper. The government controls paper distribution, and therefore controls who can print news.

She also expressed the concept of social conflictivity as citizens are also getting detained for taking part in demonstrations against the regime. In a period of 4 months 1051 persons were detained for taking part in mostly peaceful demonstrations. One powerful case was cited: a young man was detained in July 2017 where he was raped in front of another 19 detainees. Amnesty international has worked on a lot of cases of a similar matter.

The final presentation was delivered by Mr Zambrano who provided an excellent historical perspective and evolution of the Venezuelan state. He explained how since 1539 the country had exported oil and the oil industry became a major source of income for Venezuela. Zulia was cited as the richest state in Venezuela, many oil barrels that are exported from there go to the United States and other western countries. Gomez was described as the country’s first dictator who also allowed British to find oil, but they couldn’t find much. However, the well-known British and Dutch ‘Shell Oil’ company has helped shape and positively evolve the Venezuelan economy. Mr Zambrano also included a video at the end showing the beautiful landscape and culture of the country, which ended the presentations in a positive and hopeful tone for Venezuelan’s future. Afterwards, we enjoyed a fruitful question and answer session with the audience.