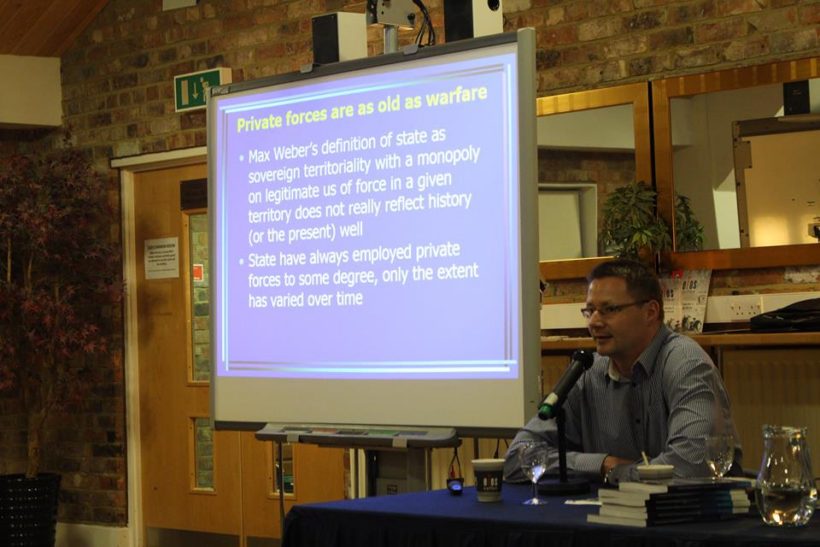 Reposted on the 2nd May 2017 By the_ustinovian

On 28 February, Café Politique tackled a theme that, for many, is both familiar and unfamiliar at the same time. From the 1980s’ film ‘The Dogs of War’, and Barack Obama jokingly threatening the Jonas Brothers with predator drones, to the news coverage, and many documentaries of intelligence operations, all the aspects covered in this event have certainly attracted wide public attention. However, these issues are less well-covered from the academic side, and Café Politique thus set out to fill this vacuum. Indeed, our seminar with Dr. Oldrich Bures, Professor Ian Leigh, and Dr. Kyle Grayson attracted what was perhaps the record attendance of the year for Café Politique – more than 60 people, although it must be noted that Dr Grayson suspected it was the free wine that attracted the people.

After a short delay due to a shortage of chairs, the event was kicked off with Professor Leigh and his presentation on accountability and oversight in intelligence operations, followed by Dr. Grayson’s take on the cultural politics of targeted killing and drone warfare. Last but not least, Dr. Bures examined the role of the private military and security companies in UN Peacekeeping Operations. Judging on the intense look of concentration on most of the faces in the audience, all of our speakers managed to bring new and interesting aspects of remote warfare into the spotlight. Indeed, after the last presentation we had a lively Q&A session, and even after the event itself there were some interesting conversations happening in the Fisher House about remote warfare and our event.