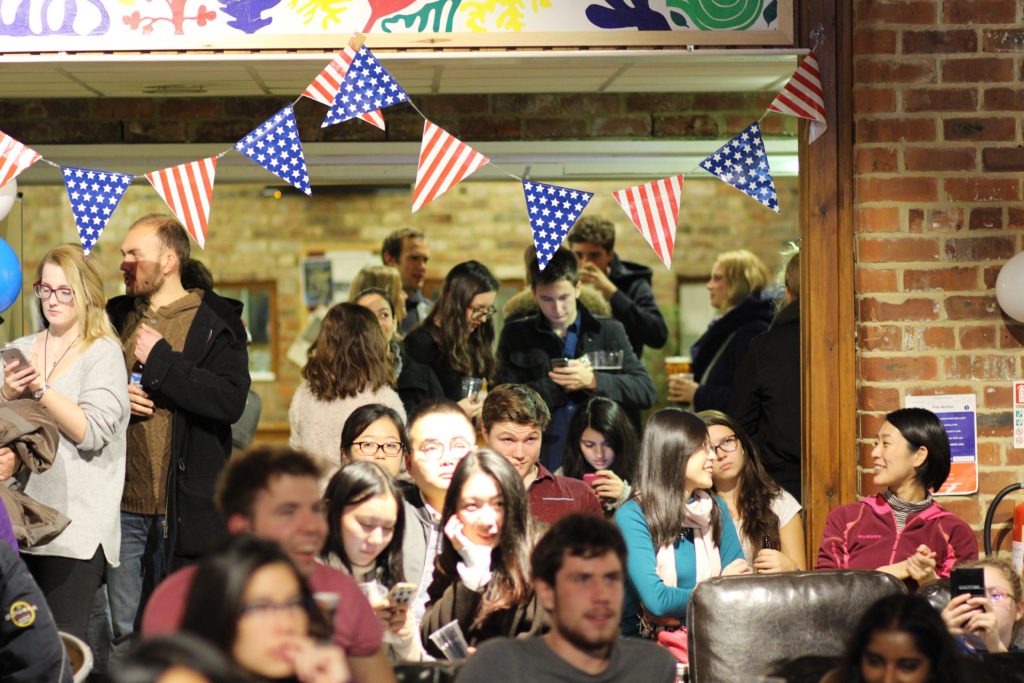 At around 6 in the morning all the posters in Fisher House were taken down. Some of them said ‘bad hombres’ or ‘nasty woman’, others talked about the infamous wall that ‘Mexico will pay for’. CNN was still on and they had not called the winner yet, but we appeared to have done just so. Now those posters seemed inappropriate and tasteless. The next day I heard someone say: ‘The posters would have been funny if Clinton had won.’ Indeed, the posters certainly looked as if they were waiting for Clinton’s victory celebrations.

Clearly, few of us in Fisher House actually expected Clinton to lose, including our guest lecturer Dr Neil Visalvanich, who after his insightful and very informative lecture was described as ‘a proper Democrat’ by one American Ustinovian. To be fair, in no way did he promise us that we would have the first ever female president of the USA. Yet, the crowd seemed very optimistic, and positively nervous. One could sense the buzz in the air when people were queuing for pizza and given bingo cards with phrases that might be mentioned during the broadcast. As one GCR committee member explained, the crowd was even more energised than before the Brexit night earlier this year.

Once the results started coming in, every time Clinton had secured a state the crowd started cheering. However, the more the race tightened, the more one was able to spot stats and graphs on many mobile phone screens. The record was, as far as I know, six simultaneous graphs on one screen. It seems that Ustinovians do not only take the election results, but also the process of following the counting and announcement of votes, very seriously. And serious it became! The statistics gave less and less of a chance for Clinton’s win every time a new result came in. By constantly monitoring this change, and reporting it, I myself managed to annoy a friend of mine, who was an enthusiastic Clinton supporter. The disbelief, with a bit of denial, was now suddenly real. No one was playing bingo anymore.

If the results shocked us, for Clinton they were ever more shocking, and most people had already gone to bed before she appeared on TV. None the less, Clinton finally gave her concession with these words: ‘This loss hurts, but please never stop believing that fighting for what’s right is worth it. It is– it is worth it’. That morning I among others learnt very painfully that if you stay up until 7.30am, it will be hard to get up for your 9am lecture, which seemed like the only lesson learnt from that night. But having heard Clinton’s speech, it is clear that her words should be the most important lesson we take home from that night.