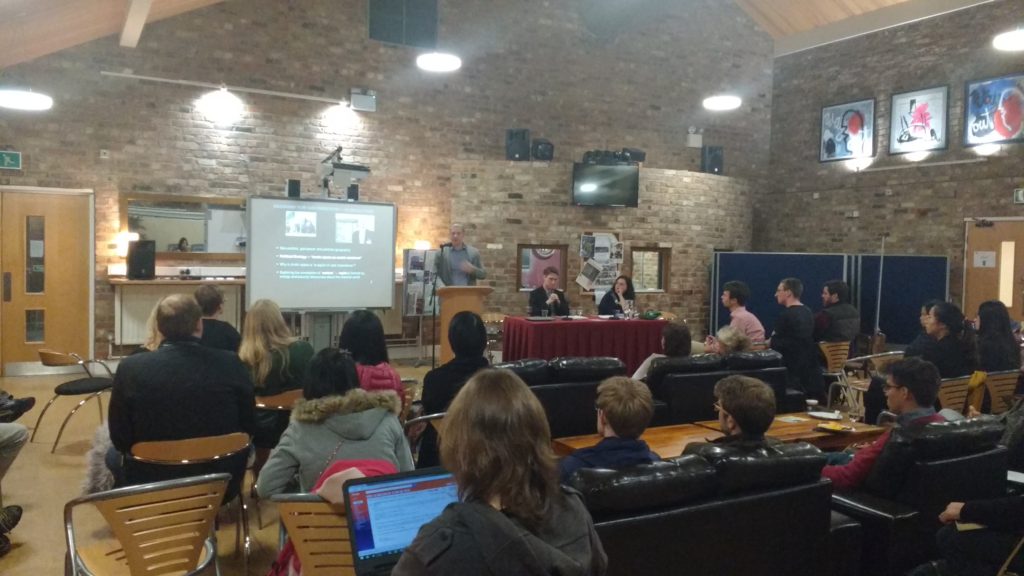 Reposted on 12th October 2016  from the_ustinovian

On 11 October 2016, Café Politique kicked off the academic year hosting a multidisciplinary seminar examining discourses around the representation of geographical spaces within the British and European contexts. Under the title ‘Britain, Europe and the rest of it: Myths and Narratives’, the event propagated new ways of understanding statehood formation from the perspectives of the European Union’s Arctic policy, Victorian literature, and the debate around multiculturalism, cosmopolitanism and Brexit.

To begin with, the event – which was overwhelmingly successful, judging from its turnout –scholars from the Global Citizenship Programme at Ustinov College introduced their teams, activities and plans for the year.

Afterwards, Jarno Valimaki, a scholar from Café Politique and chair of yesterday’s session, introduced the three main speakers of the evening, which came from a myriad of research fields in the Social Sciences and Humanities: Michael Laiho, PhD candidate at Durham’s Geography department; Tom Spray, PhD candidate at Durham’s department of English studies; and Dr. Ipek Demir, assistant professor at the department of Sociology of the University of Leicester.

The first speaker, Michael Laiho, put forward an account of his own research, which scrutinises European territory in the context of the European Union’s Arctic policy. Arguing that political elites have long anticipated a call for Arctic environmental protection and resource extraction, Mr. Laiho asked the questions “why now?” and “why an EU Arctic policy?”. Using Foucauldian discourse analysis, he tried to answer these questions claiming that “carbon” as hydrocarbons and CO2 emissions is mythologised in EU policy to promote European interests offshore in the Arctic ocean.

The second speaker, Tom Spray, explored the relationship between Scandinavian literature and British national identity in the nineteenth century. His presentations considered two key literary figures of the nineteenth century Britain – Walter Scott and William Morris – and examined how their idealised models for British nationality were influenced by a cultural renaissance in northern Europe, as Scandinavia, Germany, and Britain rediscovered a Germanic past largely overlooked by academics of the seventeen-hundreds.

Finally, Dr. Ipek Damir, engaging in a conversation about how discourses favourable to the exit of the UK from the European Unions have framed Brexit as “taking the country back”, explored cosmopolitanism and multiculturalism against the current political backdrop. Moreover, she also discussed how the latter two intertwined with contemporary debates around race and difference. She argued that multiculturalism was never about purely recognising diversity; it was about questioning national homogeneity and allowing minority groups to make claims and participate as equal citizens.

Following Dr. Damir’s presentation, the chair took some questions from the ground. The audience engaged in a fascinating discussion on the issues covered by the presentations. A question regarding Dr. Damir’s presentation was particularly challenging, as it argued that class politics may hold the key to understanding the Brexit referendum result. Notwithstanding, Dr. Damir put forward polling data that showed that voting patterns varied across ethnic groups. From Café Politique, and based on the feedback we received, we are sure that the audience will want to engage in future events.

Do you want to know more about Café Politique? Contact us at ustinov.cafepol@durham.ac.uk